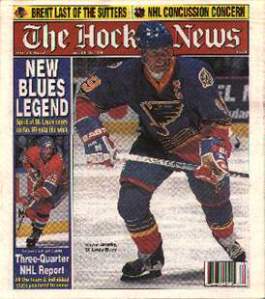 What’s that written in the top right hand corner 17 years ago? Oh, right.

On the day he passed out our Cobras jerseys (like the one Gretzky wore for the St. Louis Blues) he named the captain and assistants. The captain was no surprise. He named the only guy on the team who could take a slap shot and put it top corner. He was a French defenseman from Verdun. Then Flo – our coach – named one of the better, more passionate and passionate French Verdun forwards assistant-captain. The LaSalle guys were looking around at each other wondering if they were going to be represented in the leadership group, let alone with an English guy. I wasn’t thinking much of it at the time when Flo called my name out and handed me the patched “A” to be sewed onto my jersey.

I was so proud I was shocked. I couldn’t stop smiling. That point in my young 12 year young life – it was the greatest moment of life. Afterwards I realized that I was also a defenseman, and felt that it was rather exceptional that two defensemen would have letters on their jerseys.

We won our playoffs that year with both me and the captain in the box for the final seconds of a two goal lead. Later the provincial championship  in  Val-d’Or ( Abitibi-Témiscamingue! my favourite region in geography) brought all of Quebec’s regional champions together to play a tournament. From being considered a French speaking team in our region, we became one of the two English speaking teams at the provincials. We never had a chance. Culturally, we were mixed breed Montrealais playing against  farmer boys straight off the cow’s teat from rural areas of Quebec (the type that are 6’4 high-school kids).

And as I recall, the referees didn’t help us much. One game we had five players in the penalty box at the same time (yes, I was one of them). Flo was furious. He was yelling at the referees in English with his Quebecois accent, “Cause we’re henglish, ostie!”

That said, my twelve year old short term memory kicked in only weeks later as I felt the animosity of the ’95 referendum that June. I took it as an attack, a personal attack, against my English speaking family and friends. It was strange to take on a new cultural identity. I was always either Italian when I wanted to be with the cool kids or Polish when I wanted to be different.

What do they have against the English? I suppose there is a reason politics aren’t taught in elementary schools. A twelve year old is quick to learn, especially bad things. So I reflected those separatist haters and gave up on French. I handed back those gold stars on my book report for Le Petit Prince, and actively ignored learning the language. The well versed eye for eye we all go blind, kicked in, but in this case we all fall on our heads off the tower of Babel.

Flo’s words resurfaced years later in a distorted way when I began travelling outside of North America. Europeans and Latin Americans are well aware of the French province of Quebec, and in many cases have a special affinity for it. Just like how Flo had identified our team as English in the heartlands of Quebec, with English being the lingua Franca for travellers the world over, I had become a Quebecois the minute I left my province. Much like how you figure out being different is cool, travelling helped me see how special Quebec is compared to the rest of North America.

So I had realized the errors of my adolescents: I quickly picked up learning French again. How could I possibly be a Quebecois without speaking French? There are still Quebecois who are hard headed enough to consider bilingual Anglophones in Quebec as province-less, so I had to talk the talk, so to speak.

Something else I noticed on my travels was that when I met other Canadians they never identified with their city or province, and just said that they’re from Canada. They thought I was being presumptuous by telling people that I’m from Montreal. But I didn’t care, I still don’t. That’s where I’m from. And most foreigners know Montreal and usually say, “Oh, Quebec. You speak French.” Not a question, a statement. If you said I’m from Ontario or Edmonton, most foreigners will surely ask a question, “Where?”

Montreal and the rest of Quebec stand out from Canada and North America. I make no apologies for tying my cultural identity to my city, then my province, then my country. I haven’t bought into CBC’s mandated fabrication of a collective Canadian identity. What is Canadian identity outside of Hockey Night in Canada? There are Canadian stereotypes of being polite, friendly, but is this really identity for a nation? I find Tim Horton’s disgusting, so where else do I fit in as a Canadian guy?

When the Prince of England showed up in Canada for his honeymoon I was completely embarrassed by the positive reception Canadians gave them. The monarchy is relevant again in Canada! You know who wasn’t gushing over them, Quebecers. Why? Because we think that a monarchy in Canada is degrading, completely idiotic and shameful for a sovereign country (don’t get me started). But that’s English Canada’s history and culture, right, the UK? And with this issue for once Quebec isn’t a minority in North America – we all know what the US thinks about monarchies, excluding Saudi Arabia, of course.

But me-I, I can identify with Montreal, Quebec (and Montrealers can identify with the beginning of that sentence). I love my bagels and poutine; and buying beer for cheap (in comparison to the rest of Canada) at a gas station; and guessing what language the waitress is going to speak to us in; and making jokes in French with my English friends in front of drunken 18 year old Bostonians; and having the option to go to a strip club for a contact dance; and having the European flare of joie de vivre; and all the beautiful women from every background imaginable; and tabarnac, let’s not forget all the amazing Quebecois swear words!

I’m not going to pretend that I can make up a list like that for Canadian identity. It would be too forced, too abstract. Some people are lucky, and they grow up in a special place. Montreal, Quebec for all the hardships of the past is a special place, and probably has more character for it. Some people aren’t so lucky so they identify themselves with a greater power, a larger all inclusive identity.

But not me. I’m one of the few lucky ones. I’m from Montreal. The longer version would be Montreal, Quebec, Canada, North America, Planet Earth. And the funny thing is that, with all the subtle differences from city to province to country to continent, I’m always a minority.